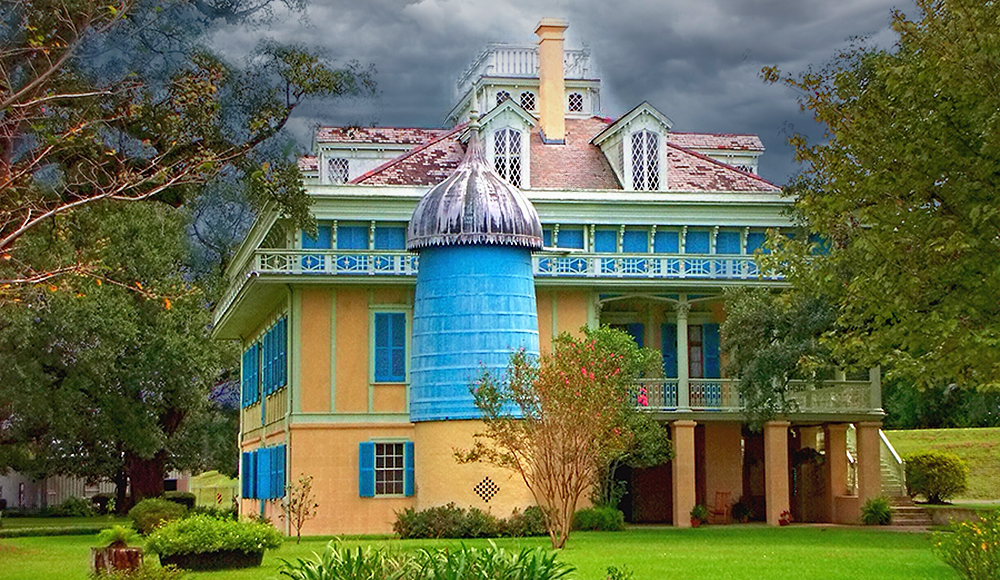 Louisiana was inhabited by Native Americans for many millennia before the arrival of Europeans in the 16th century. During the Middle Archaic period, Louisiana was the site of the earliest mound complex in North America and one of the earliest dated, complex constructions in the Americas, the Watson Brake site near present-day Monroe. An 11-mound complex, it was built about 3500 BCE. The Middle Archaic sites of Caney and Frenchman's Bend have also been securely dated to this time period, demonstrating that seasonal hunter-gatherers organized to build complex constructions in present-day northern Louisiana.

Nearly 2,000 years later, Poverty Point, the largest and best-known Late Archaic site in the state, was built. Modern-day Epps developed near it. The Poverty Point culture may have reached its peak around 1500 BC, making it the first complex culture, and possibly the first tribal culture in North America. It lasted until approximately 700 BCE.

The first European explorers to visit Louisiana came in 1528 when a Spanish expedition led by Panfilo de Narváez located the mouth of the Mississippi River. In 1542, Hernando de Soto's expedition skirted to the north and west of the state (encountering Caddo and Tunica groups) and then followed the Mississippi River down to the Gulf of Mexico in 1543. Spanish interest in Louisiana then faded away for a century and a half.

In the late 17th century, French and French Canadian expeditions, which included sovereign, religious and commercial aims, established a foothold on the Mississippi River and Gulf Coast. With its first settlements, France lay claim to a vast region of North America and set out to establish a commercial empire and French nation stretching from the Gulf of Mexico to Canada.

The settlement of Natchitoches (along the Red River in present-day northwest Louisiana) was established in 1714 by Louis Juchereau de St. Denis, making it the oldest permanent European settlement in the modern state of Louisiana. The French settlement had two purposes: to establish trade with the Spanish in Texas via the Old San Antonio Road, and to deter Spanish advances into Louisiana. The settlement soon became a flourishing river port and crossroads, giving rise to vast cotton kingdoms along the river. Over time, planters developed large plantations and built fine homes in a growing town. This became a pattern repeated in New Orleans and other places.

Initially, Mobile and then Biloxi functioned as the capital of the colony. Recognizing the importance of the Mississippi River to trade and military interests, France made New Orleans the seat of civilian and military authority south of the Great Lakes in 1722. From then until the United States acquired the territory in the Louisiana Purchase of 1803, France and Spain jockeyed for control of New Orleans and the lands west of the Mississippi.

France ceded most of its territory to the east of the Mississippi to Great Britain in 1763, in the aftermath of Britain's victory in the Seven Years' War (generally referred to in North America as the French and Indian War). The rest of Louisiana, including the area around New Orleans and the parishes around Lake Pontchartrain, had become a colony of Spain by the Treaty of Fontainebleau (1762), although the transfer of power on either side of the river would be delayed until later in the decade.

When the United States won its independence from Great Britain in 1783, one of its major concerns was having a European power on its western boundary, and the need for unrestricted access to the Mississippi River. As American settlers pushed west, they found that the Appalachian Mountains provided a barrier to shipping goods eastward. The easiest way to ship produce was to use a flatboat to float it down the Ohio and Mississippi Rivers to the port of New Orleans, from whence goods could be put on ocean-going vessels. The problem with this route was that the Spanish owned both sides of the Mississippi below Natchez.

Napoleon's ambitions in Louisiana involved the creation of a new empire centered on the Caribbean sugar trade. By the terms of the Treaty of Amiens of 1802, Great Britain returned ownership of the islands of Martinique and Guadaloupe to the French. Napoleon looked upon Louisiana as a depot for these sugar islands, and as a buffer to U.S. settlement. In October 1801 he sent a large military force to take back Saint-Domingue, then under control of Toussaint Louverture after a slave rebellion.

When the army led by Napoleon's brother-in-law Leclerc was defeated, Napoleon decided to sell Louisiana.

Thomas Jefferson, third President of the United States, was disturbed by Napoleon's plans to re-establish French colonies in America. With the possession of New Orleans, Napoleon could close the Mississippi to U.S. commerce at any time. Jefferson authorized Robert R. Livingston, U.S. Minister to France, to negotiate for the purchase of the City of New Orleans, portions of the east bank of the Mississippi, and free navigation of the river for U.S. commerce. Livingston was authorized to pay up to $2 million.

An official transfer of Louisiana to French ownership had not yet taken place, and Napoleon's deal with the Spanish was a poorly kept secret on the frontier. On October 18, 1802, however, Juan Ventura Morales, Acting Intendant of Louisiana, made public the intention of Spain to revoke the right of deposit at New Orleans for all cargo from the United States. The closure of this vital port to the United States caused anger and consternation. Commerce in the west was virtually blockaded. Historians believe that the revocation of the right of deposit was prompted by abuses by the Americans, particularly smuggling, and not by French intrigues as was believed at the time. President Jefferson ignored public pressure for war with France, and appointed James Monroe a special envoy to Napoleon, to assist in obtaining New Orleans for the United States. Jefferson also raised the authorized expenditure to $10 million.

However, on April 11, 1803, French Foreign Minister Talleyrand surprised Livingston by asking how much the United States was prepared to pay for the entirety of Louisiana, not just New Orleans and the surrounding area (as Livingston's instructions covered). Monroe agreed with Livingston that Napoleon might withdraw this offer at any time (leaving them with no ability to obtain the desired New Orleans area), and that approval from President Jefferson might take months, so Livingston and Monroe decided to open negotiations immediately. By April 30, they closed a deal for the purchase of the entire Louisiana territory of 828,000 square miles (2,100,000 km2) for 60 million Francs (approximately $15 million).

Part of this sum, $3.5 million, was used to forgive debts owed by France to the United States.[55] The payment was made in United States bonds, which Napoleon sold at face value to the Dutch firm of Hope and Company, and the British banking house of Baring, at a discount of 87½ per each $100 unit. As a result, France received only $8,831,250 in cash for Louisiana. Dutiful English banker Alexander Baring conferred with Marbois in Paris, shuttled to the United States to pick up the bonds, took them to Britain, and returned to France with the money – which Napoleon used to wage war against Baring's own country.

When news of the purchase reached the United States, Jefferson was surprised. He had authorized the expenditure of $10 million for a port city, and instead received treaties committing the government to spend $15 million on a land package which would double the size of the country. Jefferson's political opponents in the Federalist Party argued the Louisiana purchase was a worthless desert, and that the Constitution did not provide for the acquisition of new land or negotiating treaties without the consent of the Senate. What really worried the opposition was the new states which would inevitably be carved from the Louisiana territory, strengthening Western and Southern interests in Congress, and further reducing the influence of New England Federalists in national affairs. President Jefferson was an enthusiastic supporter of westward expansion, and held firm in his support for the treaty. Despite Federalist objections, the U.S. Senate ratified the Louisiana treaty on October 20, 1803.

By statute enacted on October 31, 1803, President Thomas Jefferson was authorized to take possession of the territories ceded by France and provide for initial governance.[57] A transfer ceremony was held in New Orleans on November 29, 1803. Since the Louisiana territory had never officially been turned over to the French, the Spanish took down their flag, and the French raised theirs. The following day, General James Wilkinson accepted possession of New Orleans for the United States. A similar ceremony was held in St. Louis on March 9, 1804, when a French tricolor was raised near the river, replacing the Spanish national flag. The following day, Captain Amos Stoddard of the First U.S. Artillery marched his troops into town and had the American flag run up the fort's flagpole. The Louisiana territory was officially transferred to the United States government, represented by Meriwether Lewis.

The Louisiana Territory, purchased for less than 3 cents an acre, doubled the size of the United States overnight, without a war or the loss of a single American life, and set a precedent for the purchase of territory. It opened the way for the eventual expansion of the United States across the continent to the Pacific.

Shortly after the United States took possession, the area was divided into two territories along the 33rd parallel north on March 26, 1804, thereby organizing the Territory of Orleans to the south and the District of Louisiana to the north.

By 1840 New Orleans had the biggest slave market in the United States, which contributed greatly to the economy. It had become one of the wealthiest cities and the third largest city in the nation. The ban on the African slave trade and importation of slaves had increased demand in the domestic market. During these decades after the American Revolutionary War, more than one million enslaved African Americans underwent forced migration from the Upper South to the Deep South, two thirds of them in the slave trade. Others were transported by their masters as slaveholders moved west for new lands.

With changing agriculture in the Upper South as planters shifted from tobacco to less labor-intensive mixed agriculture, planters had excess laborers. Many sold slaves to traders to take to the Deep South. Slaves were driven by traders overland from the Upper South or transported to New Orleans and other coastal markets by ship in the coastwise slave trade. After sales in New Orleans, steamboats operating on the Mississippi transported slaves upstream to markets or plantation destinations at Natchez and Memphis.